EA has been plagued with connectivity issues. Users are experiencing Battlefield 2042 error and the company is yet to provide a fix. This issue, along with other events, indicate EA may be using shady practices in order to make money off of users

The “new battlefield game 2021” is a problem that many gamers are facing. EA servers have been crashing and failing to connect, leaving players unable to play the game. 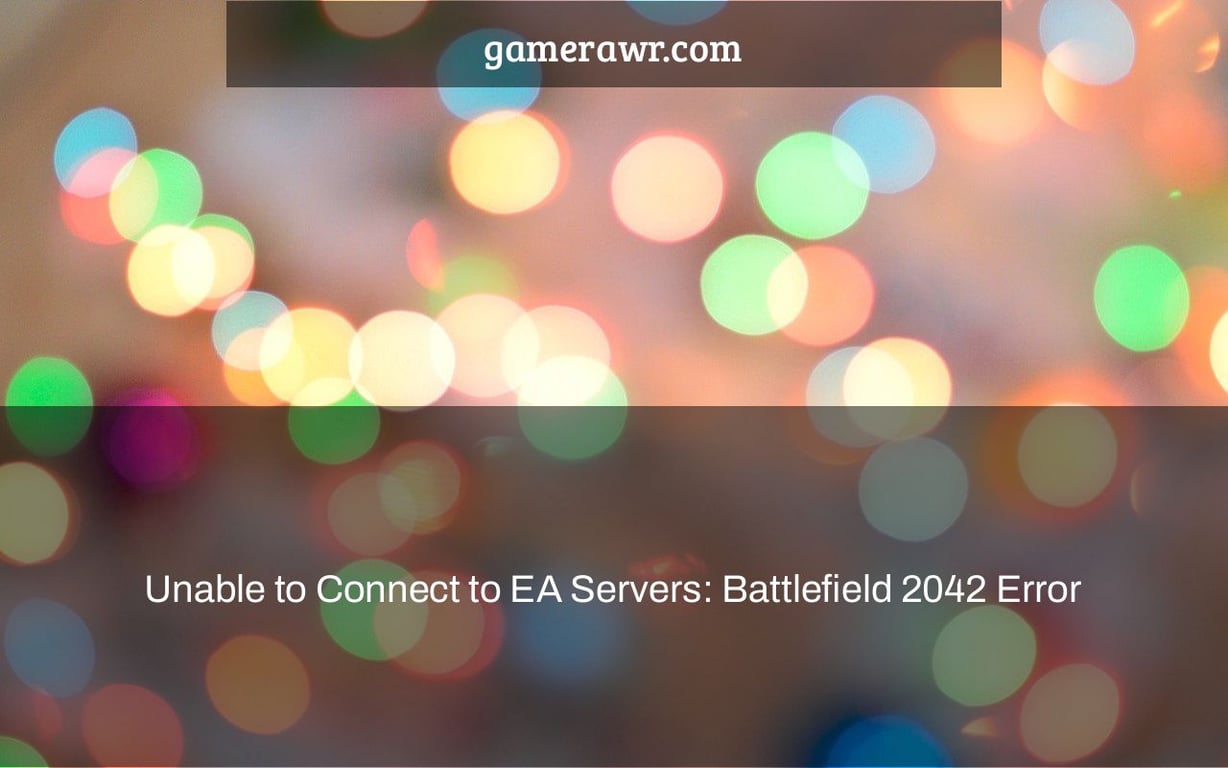 This article was created using information from EA’s official guide for resolving Battlefield game connection difficulties. Keep in mind that Battlefield 2042 was just released, and the servers have been experiencing some issues since then. As a result, completing the instructions in this article will only ensure that there are no problems on your end. If you’re getting the ‘Unable to connect to EA servers’ problem because of a server issue, we can’t guarantee that following the methods in this article will repair it.

If there is a momentary disconnect from EA servers, the game will display a ‘Unable to connect to EA servers’ issue, and restarting the game is one of the best methods to resolve this.

To completely exit the game, use Task Manager to ‘End Task’ all instances of Battlefield 2042. Before relaunching the game, make sure Easy Anti Cheat (Battlefield 2042’s built-in anti-cheat tool) is turned off.

Sign out of your account and restart EA Desktop if you’re playing the game from EA Desktop on Windows 10.

Getting the error ‘Unable to Connect to EA Servers’? Check for a server outage in Battlefield 2042.

This error usually appears when there has been a server outage, and there isn’t much you can do about it. Perhaps the devs sprang a server maintenance session out of nowhere, or perhaps the server was DDoSed. Whatever the cause, you’ll have to wait until the developers have finished repairing the server and re-launching it.

If you discover that the server in your area has gone down, you may immediately stop reading this instructions and binge watch an episode or two on Netflix. You will be able to join games normally once the servers have been restored.

Here’s how to check the Battlefield 2042 server status in your area.

You may be unable to connect to online gaming servers due to a momentary fault in your router or network. In that situation, any other game that needs an internet connection will give you a server connection problem. You can’t seem to connect to any online game’s server? Your router is most likely in need of a rest. Unplug the router and only turn it back on after a minute. After that, the router will have cleared any temporary network cache that may have caused the Battlefield 2042 server connection problem.

You should try it! How to Chat with Your Friends Online Using Discord on Xbox

Check to see whether your computer is overheating.

No! I’m not referring to the router. In online battles, an overheated gaming PC may cause stuttering, as well as significant packet loss and ping spikes. This is how it works. When your CPU’s clock speed is reduced owing to thermal throttling, data isn’t processed as quickly, resulting in frame time spikes and, eventually, unplayability. A connection to the remote server will not be created if your machine is already overheating at the loading screen (when attempting to join a lobby). On my HP Pavilion Gaming Laptop, I had the identical problem with Call of Duty Modern Warfare. The CPU was overheating, and the game was stuttering horribly even while looking for a match owing to a rapid decrease in clock speed. The game would lead me to a lobby and then, as soon as the countdown was over, I’d be disconnected due to a communication fault.

Is the Speed of Your Internet Connection Enough for Online Gaming?

Although the recommended speed for a decent multiplayer experience on Xbox Live is just 1.5 Mbps, you may need a slightly quicker connection to guarantee excellent online gaming on PCs since Windows 10 has a lot of background operations that suck up your bandwidth. To avoid random packet loss and delay, make sure your connection’s effective speed is at least 5Mbps (or 0.625 Megabytes per second). When playing modes with a large number of people, if your network speed is much lower, you may encounter random disconnection from the server (the 128-player mode, for instance).

Don’t forget to have a look at this one! What to Do If Your Fortnite Mic Isn’t Working

Did you know that users on PC and next-gen consoles are seeing increasing server connection issues? Xbox One and PS4 players, on the other hand, are only matched in 64-player lobbies, which DICE servers can easily manage, but the newly added 128-player option has been plagued by issues since the game’s release.

Why cant I connect to Battlefield 2042 servers?

A: Battlefield 5 servers are currently unavailable due to maintenance. We apologize for the inconvenience and thank you for your understanding.

Are EA servers down for Battlefield 2042?

How do I fix failed to connect to EA servers?

A: If you are experiencing a failed to connect to EA server error, it may be due to your internet connection. You can try restarting the PS4 and reconnecting again and if this does not work then please contact Sony customer support for further assistance with this issue.